Pillars of the Legion Community

Although chapters in this annual history book are usually reserved for the activities of individual members or committees within the legion, it seemed appropriate to dedicate a separate chapter to one of the strongest foundations supporting Post 82’s relationship with the community it serves.

The story of this relationship began in 1920.  It was only two years since the end of World War I and members of the Charles County community were still somewhat in mourning for the nine members of the county who had given their lives in that “war to end all wars.”  Those citizens wanted to memorialize the memory of these men who gave so much.  They began by conducting events and soliciting business men to raise funds for some type of monument which would stand forever in time.  After some debate a decision was made to erect two pillars with a bronze plaque containing the names of those who had made the supreme sacrifice in honor of their country.

Meetings were held with community leaders and a final decision was made to erect two stone pillars containing the bronze tablet at the entrance to the Charles County court house in La Plata, Maryland.  La Plata being the Charles County seat.  A construction committee headed by Mr. Irving Jones planned the design and the pillars were finally set in place in 1921.

The dedication ceremony marked the beginning of a life for the pillars which ended in early 1953.  At that time the county was growing and expansion of the original courthouse was necessary.  Unfortunately, the new wing for the courthouse was going to be constructed in the area where the pillars stood.  Consequently, they had to be dismantled.

Word of the dismantling of these pillars soon reached members of Harry White Wilmer, Post 82.  Under the leadership of the then Post Commander, Walter Reese, the members of the Legion decided to approach the county commissioners and offer to relocated the pillars to the grounds of Post 82.  Commander Reese was more than happy to inform the membership that the commissioners had approved the move.  In conjunction with the move the membership also added a new bronze tablet listing the 62 members of Charles County who had given their lives during World War II.  They also made a commitment to add the names of those who had given their lives in the Korean war.  (It was 1953 and the Korean war was in its final stages but statics had not yet been completely tabulated.)

The process of the pillars being relocated to Post 82 was finally complete and on Armistice Day, November 11, 1953, Memorial Services and War memorial dedication ceremony was held at the Post home in La Plata, Maryland.  Beginning with a parade which led to the Post home, a memorial dedication service was held beginning at 1100 hours.   The Master of Ceremonies for the event was American Legion Vice Commander Larry A. Sullivan, Jr.  The unveiling of the pillars was conducted by Post Commander Walter Rees and president of the Women’s Auxiliary, Mrs. Estelle Hilderbrand.  The guest speaker for the event was Lt. Colonel William W. Hague, Chief of Troop Information and Education, 2nd Army Headquarters, Ft. Meade, Maryland.

Since that blustery November day in 1953, the bronze tablets on these Pillars and Memorial have been expanded to include members of the Charles County community who have given their lives in the Korean War, Viet Nam War and the wars in Iraq and Afghanistan.  Each year on Memorial Day, a memorial service is conducted at this memorial.  There also stands the flag of the United States of America, lighted 24hours per day every day of the year.  Along side the flag of our nation stands the flag of the State of Maryland and the flag remembering those members of the United States military who remain unaccounted for.  This flag is commonly known as the flag of America’s POWs. 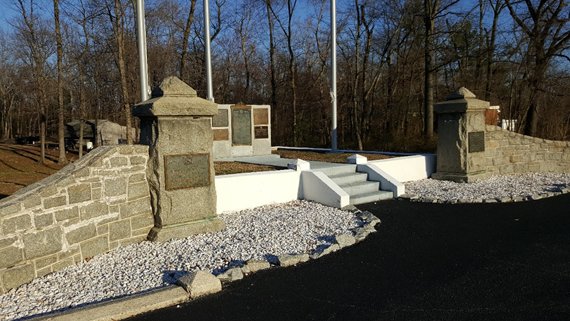 Today’s view of the original two pillars which were relocated from the court house in 1953. 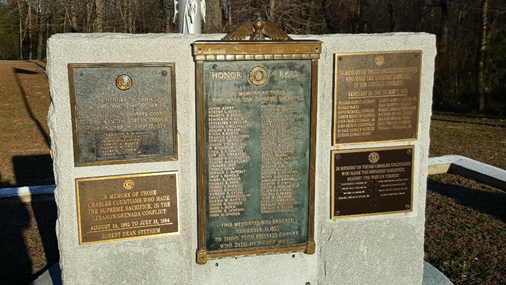 Bronze tablets which have been added to the War Memorial at Post 82 in La Plata, Maryland.